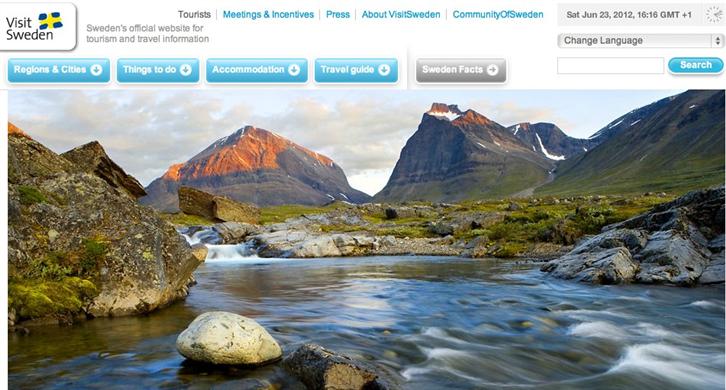 What would you do, if Taiwan’s tourism is handed down to ordinary people like you and me? You’re thinking, a country’s tourism affect many people’s livelihoods. Such significant task should go through the authority so that it could be packaged nicely and consistently. How could it be left to ordinary civilians, who may do a botched job?

Sweden thinks otherwise. Swedish Tourism Board initiated a campaign, “Curator of Sweden”. The Board thinks that “A country is constituted by people! There is no single channel that could claim to be the sole representative of whole Sweden and therefore, rather than doing the conventional way which is led by the Tourism Board, we released the right for Swedish people to paint the picture of Sweden!”

Since 2009, Swedish Tourism Board started to utilize social media to communicate with people who wish to visit Sweden. The Board opened a twitter account under @sweden. In the end of 2011, Swedish government decided to support the new campaign, “Curator of Sweden” and handed over the twitter account to Swedish people! Every chosen Swedish can enjoy a week of managing right to this account where they could say whatever they feel like and demonstrate to the world the Sweden in their eyes.

Of course, the Tourism Board didn’t just give the right to any random people, they wanted someone who could show the country’s value or possess of special talent, for example, gay opinion leader, people from fashion, design or creative fields, farm owners, students, writers and even truck drivers who love coffee etc.

From my observation, I came to believe that Swedish Tourism Board really gambled it ‘for real’, because there were some managers who really said what they felt like saying (e.g. swearing). But this has also made the twitter account appear to be natural and authentic.

Let me give you an example, Sonja, who was the manager from the period of June 11 to June 17.  This is her self-introduction:

“My name is Sonja and I’m a 27-year old womanlike human being from northern Sweden. I grew up in a little itsy bitsy village called Latikberg, witch means cloudberry mountain in native swedish (samiska?). All people there are relatives and they all own tractors. In the autumn we had to pick up potatoes, in the winter we shoveled snow, in the spring we were confused and the summer forced us into growing thick skin and made us the bad motherf*ckers we are. Because of the big swarms of mosquitoes that will drain you on blood until death unless you can take it.

When I was 19 years old I took my stuff (including my boyfriend) and moved to Gothenburg. Then I got pregnant two times in a row. Now I’m a single and low educated mother, but at least I don’t do drugs and prostitution. Instead I have a blog and I write things, and I also talk on national radio from time to time. I don’t know what I want to do in the future. Thinking about the future is not my specialty, apparently. But I’m excited to know if we all die the 21st of December.”

Her tweets also demonstrate real life conversation, instead of overselling government-filled content. Some people asked about her hometown, some about traveling, some discussed life with her… Have you figured out yet? These real questions and answers are actually the kind of things we care about when we travel.

Curator of Sweden, there is no deliberate statements that whitewash the flaws, beautify and repackage the truth, but imperfect and real people. Through engaging in dialogues with different Swedish citizens from all walks of life every week, this is how Sweden creates its charm.

Born in the 60s, Mika has worked in the field of consumption marketing for decades. He experienced brand strategy, product concept all the way to official launch. He cares about traditional marketing model as well as the changes arise from Web2.0 and social media.